As renewable energy technologies have been implemented in the market, it is necessary to develop methodologies to alleviate their power fluctuation and match supply and demand. This requires the development of large-scale energy storage. Under these circumstances, storing electrical energy in the form of chemical energy by producing synthetic gas through solid oxide electrolysis cells has been introduced as a promising option. Such syngas can be further processed to produce synthetic liquid fuels or value-added plastics. The MES lab has investigated primary reaction pathways and the effect of species transport, suggested in-situ nano-alloying processes to manufacture SOEC embedded with catalysts, provided methodologies to control cell operations, and enhanced energy storage capacity.

With shale gas production booming, there have been great needs for effective utilization of natural gas. By using dense ceramic membranes which have mixed ionic-electronic conductivities, oxygen is selectively separated from the air stream through ion transport processes, enabling fuel conversion in a controlled manner. Such oxygen transport membrane reactors can be used for gas reforming, oxy-fuel combustion or higher hydrocarbon synthesis. Moreover, thin membranes with a thickness of few hundreds of microns and their stacked structure result in substantially small footprints required for reactor installation. In these reactors, oxygen permeation and fuel conversion are strongly coupled through the local thermodynamic state in the vicinity of the membrane. To elucidate and control these coupled reaction-transport processes, the MES lab has fabricated asymmetric membranes, characterized local thermodynamic state numerically and experimentally, examined the phenomena occurring in the very proximity of the membrane, and derived key parameters to control heat and mass transport. 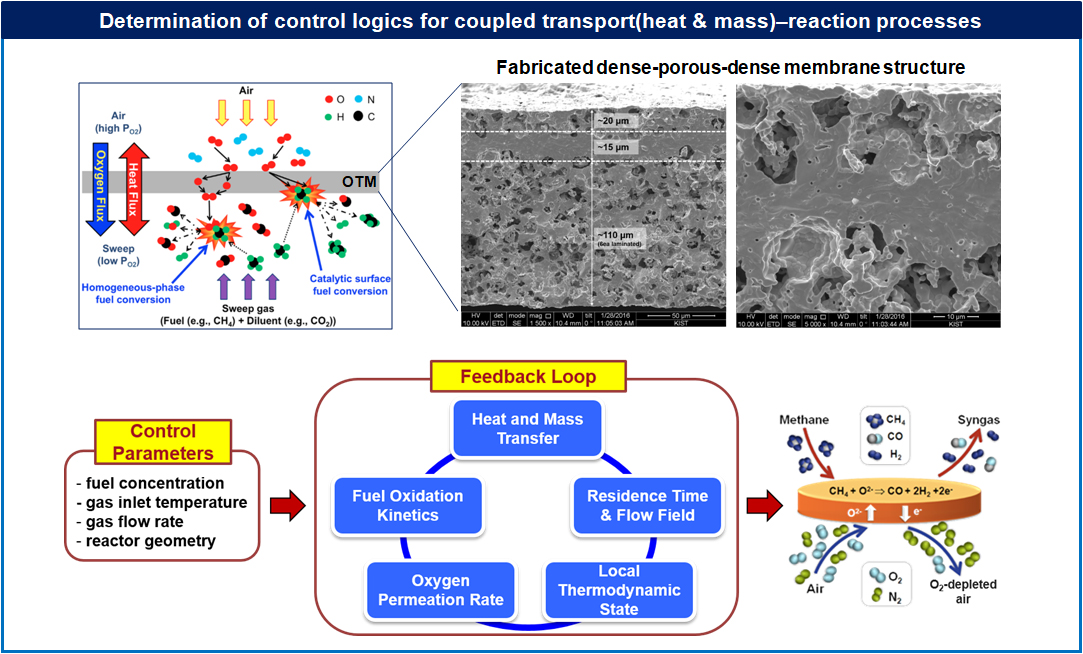