Humans have long learned and used how to convert and store the energy required for their activities. Typically, lithium-ion batteries act as energy storage devices in mobile electronic devices that we use every day. Now, due to the recent proliferation of battery electric vehicles and renewable energy systems amid the recent tightening environmental regulations, lithium-ion batteries are also widely used for electric vehicles and large-scale energy storage systems. However, their safety issues upon fast-charging or external/internal damage hinder their market deployment. To overcome such limitations, our goal is to improve the safety of lithium-ion batteries by elucidating abnormal behaviors, internal thermal/electrochemical transport mechanism, and gas generation/leakage processes, which prevents thermal runaway and explosion 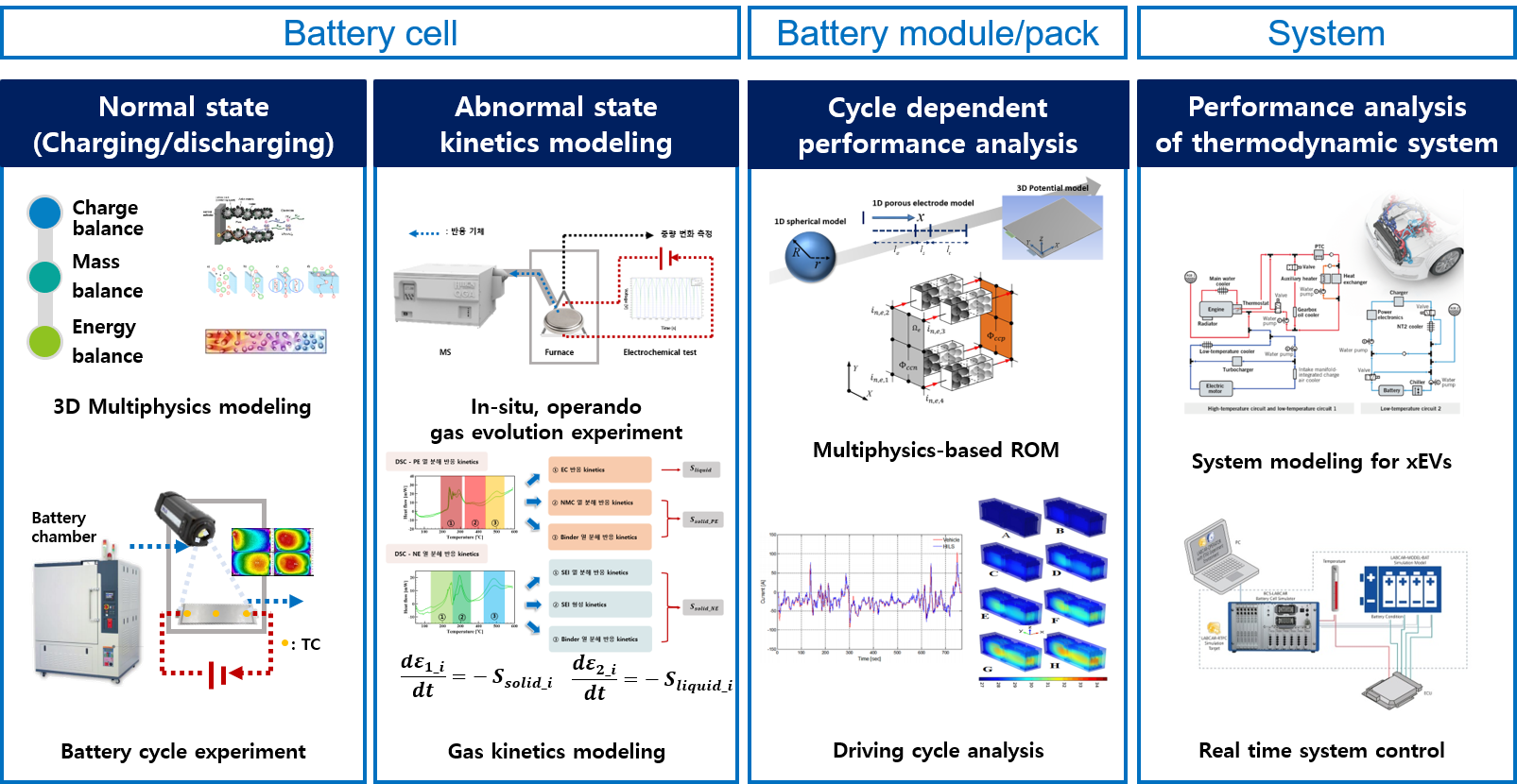 1. Numerical analysis for fast charging/abusing behavior using a multi-physics based electrochemical-thermal model
Abnormal phenomena such as gas generation/venting/thermal runaway occur in li-ion battery cells under harsh conditions. Experimentally, there are several constraints such as cost and space to analyze these phenomena repeatedly, and the detailed internal distribution cannot be confirmed. In this reason, modeling studies on abnormal behavior are needed to understand and mitigate thermal runaway phenomena. In order to improve the accuracy of the numerical analysis of a lithium-ion battery, the MES laboratory implements a multi-physics analysis technique that can analyze simultaneously charge transfer/mass transfer/heat transfer. The reliability of the model developed is ensured by accounting for actual material and shape of electrodes and electrolyte, which makes the electrochemical-thermal behavior analysis of a local point possible. After modeling the mechanism of side reactions and obtaining types/quantities of gases by thermal analysis, we integrate them with a three-dimensional electrochemical model to examine voltage, current, and internal lithium-ion concentrations. In addition, we conduct research on a reduced-order model for battery module/pack analysis. The reduced-order model increases the calculation efficiency while using the governing equations of the existing electrochemical model with high accuracy. The in-house code developed by the MES laboratory ensures accuracy and greatly reduces computational cost, enabling efficient research at the battery module/pack unit. 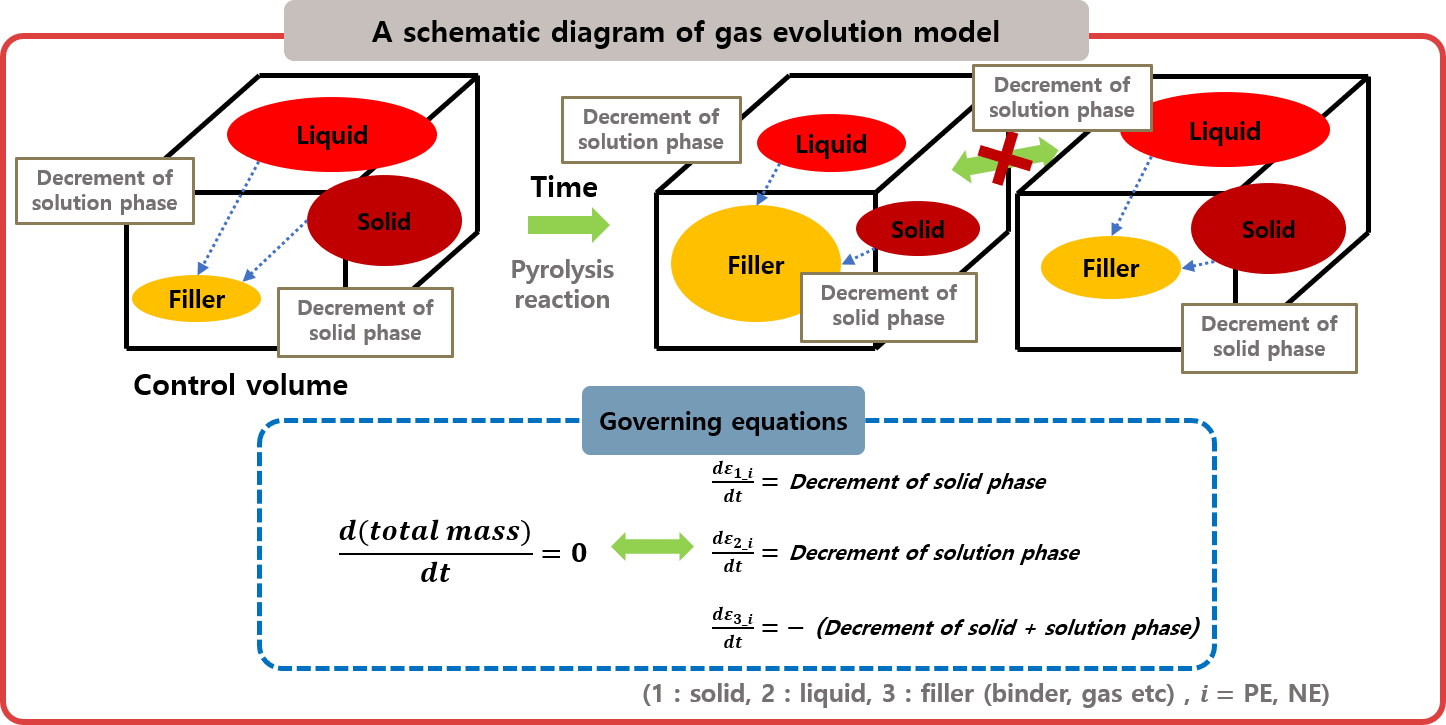 2. Lithium-ion battery experiments under abusing states
In abnormal situations like internal/external short circuits, the amount of heat generation inside the lithium-ion battery increases significantly. Due to the high amount of heat generated, the side reactions inside the battery are facilitated, resulting in gas generation. To analyze the side reaction mechanism through which the gas inside the lithium-ion battery generates and to determine the composition and amount of gas generated, the MES laboratory carries out the entire process from cell fabrication to in-situ, operando characterization. We perform analyses such as DSC, TGA-MS, in-situ FT-IR to investigate the gas evolution mechanisms and to examine quantitatively gases produced from electrode decomposition/oxidation reactions.

3. Prognosis and diagnosis for failure and remaining useful life of Li-ion battery
While using Li-ion batteries, there can be some serious accidents and problems such as fire, thermal runaway, and breakdown due to various causes. The main factors which cause these problems include improper fast charging patterns, overcharging, and lithium crystal formation. Therefore, it is necessary to develop an algorithm for predicting and diagnosing failure and lifespan of a lithium-ion battery for user safety and battery stability. The process of detecting an abnormal condition, recognizing the situation and identifying the part where the abnormality is detected can be regarded as the diagnosis process. Using the database accumulated through the diagnosis process, it is possible to predict fire and future safety status of a battery. To obtain the database for the development of prognostic and diagnostic algorithms, an equivalent circuit battery analysis model that can be quickly calculated is mainly used, and Kalman filter and Fuzzy logic are typically used as diagnostic algorithms.

For prognostic algorithm, Random forest algorithm is usually used, which is based on the database from battery analysis model. Finally, it is possible to proceed to the level of improving the prediction accuracy by introducing a statistical approach-based prediction technique that estimates the Remaining Useful Life (RUL) by combining the physical-based model and the data-based model. 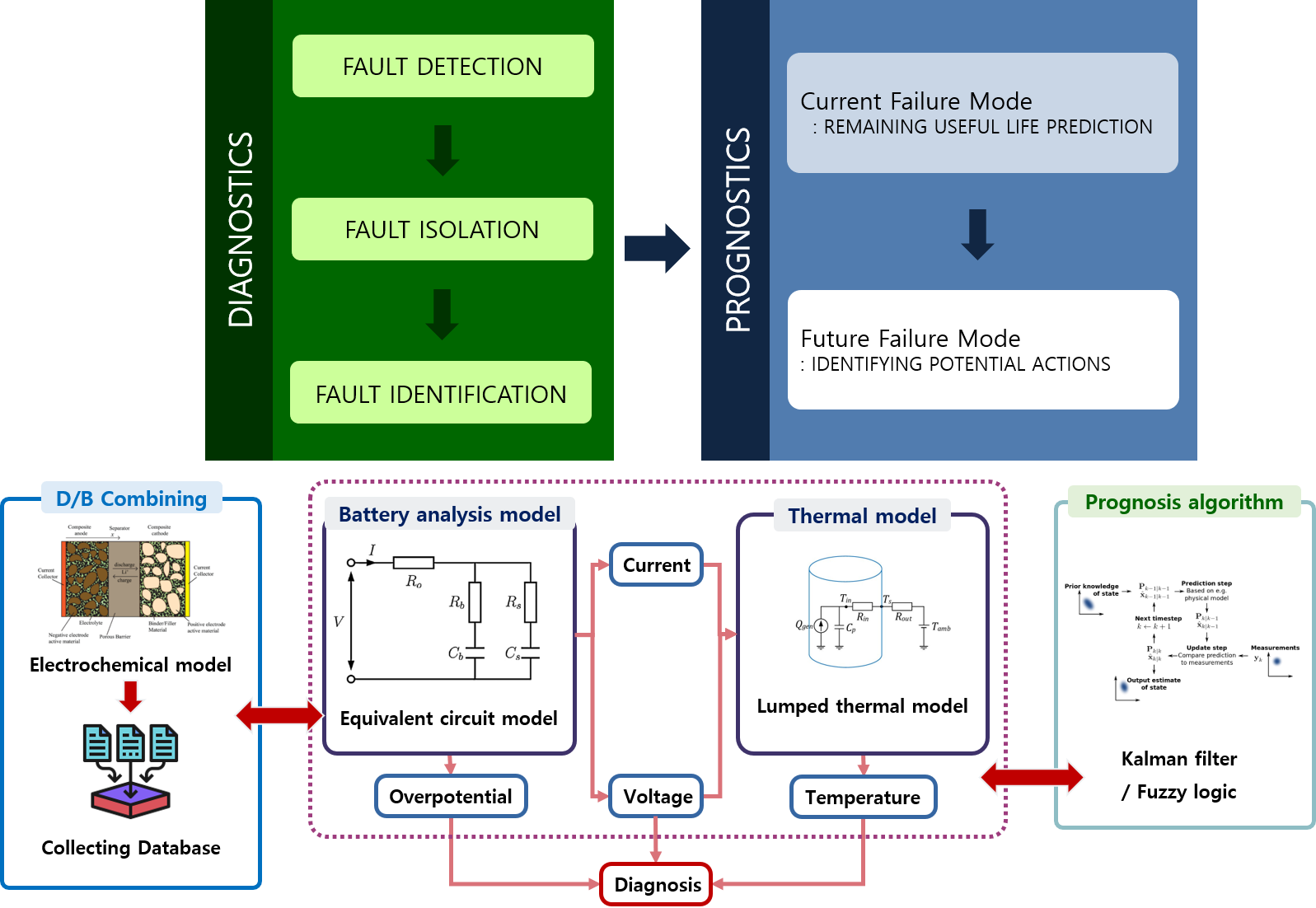 4. Mechanical-electrochemical integrated numerical analysis
Battery safety and reliability are affected by mechanical factors such as stress and tension that can result in mechanical deformation of separator and cell casing. It can lead to internal/external short circuits which is one of the well-known causes of thermal runaway. Because of this, we aim to build up a platform that integrates mechanical and electrochemical models. For the various load conditions, our platform will determine whether the separator is broken and the temperature increase rate due to the increased internal resistance. In addition, this platform will eventually enable the diagnosis of battery failure and the temperature rise by external load, which improves the battery safety and reliability.